~ Things of the Past 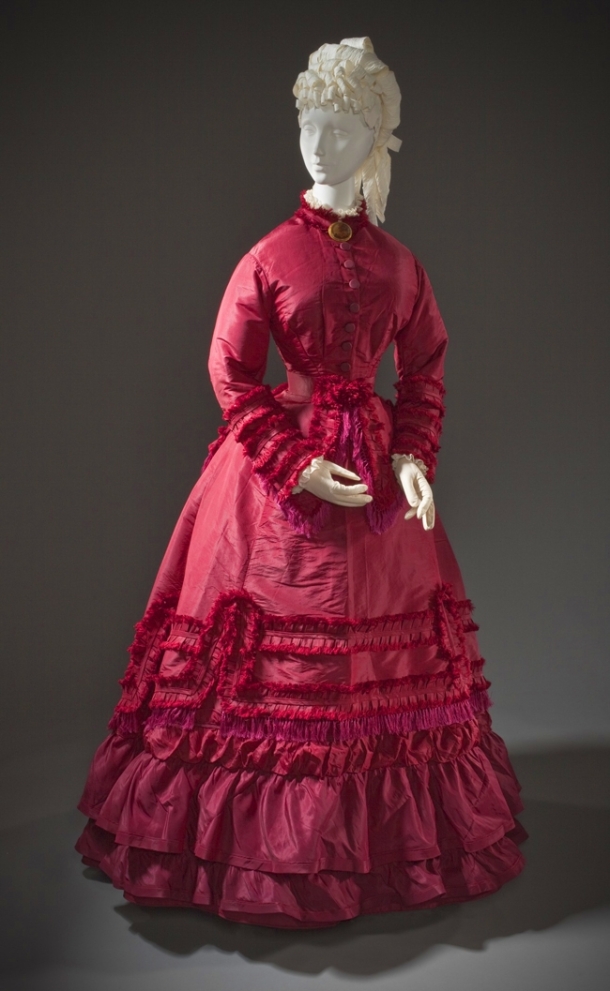 ★ How sensational is this dress?! The colour is amazing! It was made in the United States around 1870, and that date, together with the rich and vibrant colour, suggests it was dyed with a then still relatively new aniline dye. Aniline dyes were the first synthetic dyes ever made, and were discovered by William Henry Perkin in 1856, during a failed attempt to synthesize the anti-malarial compound quinine. Perkin’s accidental discovery yielded an intense purple coloured dye he called ‘mauveine’, but within a few short years many other colours followed including fuchsine, safranine and induline. Far more colour-fast than natural dyes, aniline-derived colours were also brighter and cheaper to make, enabling textile manufacturers to produce vivid fabrics on a large scale at prices more accessible to the average consumer. If you’re interested in the history of clothing or textiles, it’s a fascinating subject, as without Perkin’s discovery it’s pretty certain that fashion today would be very, very different. Anyway, enough of that tangent, let’s get back to the dress! 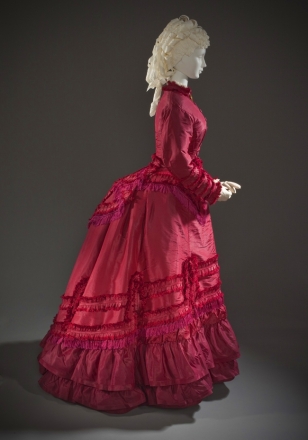 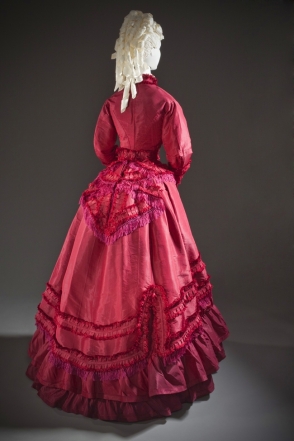 The c.1870 date also makes the dress interesting, because it’s right in the middle of the transition period from the very large hooped crinoline skirts of the 1860s. You can see that this is very definitely a bustle, since all of the fabric is toward the back of the dress, but it retains some of the width and fullness of the earlier crinoline, with a gradual fanned out shape creating a train. Later bustle dresses had a far more pronounced ‘hump’ of fabric immediately below the waist, and a narrower shape in which the skirt fell quite sharply to the floor – a distinctly different, and some would say more severe, silhouette. 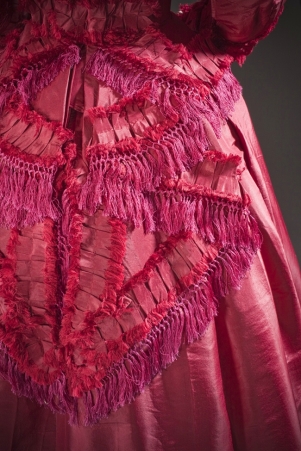 Made of silk taffeta and lined with linen and cotton twill, the dress is adorned with a rather large amount of elaborate fringing, pleating and tassels. I’m a total passementerie junkie, so for me, it’s these trimmings that really make this dress something special. The silk macrame fringe is particularly fun, and has survived remarkably well considering the garment’s age. I also love the fact that the tassels (and the bottom tier of the skirt, unless I’m very much mistaken) are a slightly different shade to the dress, which assuming it’s not due to variations in lighting or the way the dyes have aged, really adds an interesting little twist. Love it!

This little gem is in the collections of LACMA, but isn’t currently on public display. Makes me wonder what other gorgeous pieces they might have stashed in their archive…