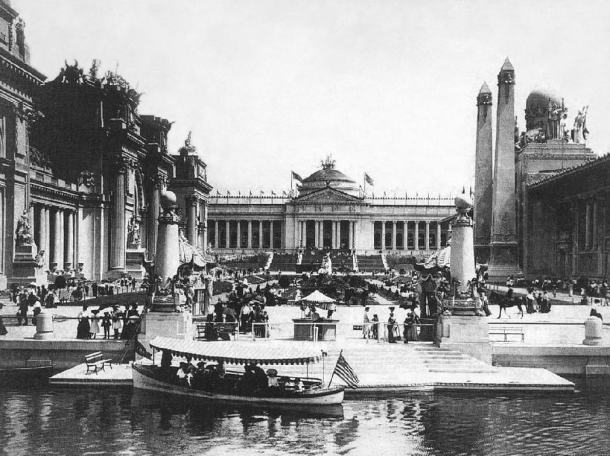 ★ The Louisiana Purchase Exposition – better known as the St. Louis World’s Fair – opened in St. Louis, Missouri, on this day in 1904. Intended to commemorate the centenary of the 1803 purchase of the Louisiana territory from France, the fair showcased a range of exhibits from 63 countries and was visited by over 19.6 million people during its seven-month season. Taken from a bridge over the lagoon, this view shows the sunken garden surrounded by just three of the several dozen exhibition spaces scattered around the 1,270 acre site.

On the left is the Palace of Liberal Arts, designed by architects Barnett, Haynes & Barnett. Devoted to displays showing various products and their manufacture, the building housed items such as coins from the British Mint; German fine printing; ancient Chinese books and carvings; lithographs, engravings and maps; a large collection of musical instruments; photographic exhibitions; models of famous lighthouses; and other items from around the world that demonstrated human skill and achievement.

In the centre of the photo is the U.S. Government Building, which was designed in the neoclassical style by James Knox Taylor of the U.S. Department of the Treasury. Inspired by the Roman Pantheon, the building represented every department of the government, and even contained a working post office. Artifacts from the Smithsonian Institute were featured, and the War Department displayed models of Civil War battlefields and even staged live demonstrations of the guns and weaponry used in national defense. Other exhibits emphasized the natural resources of the United States, with the building housing displays of fresh and salt water fish, and showing films about nature preservation and the establishment of the country’s national parks.

On the right is the Palace of Mines and Metallurgy, which covered 22-acres and was designed by architect Theodore C. Link. Intended to give visitors an idea of the processes needed to turn raw materials into useful products, the building showcased hundreds of models of mines, mining technology, and specimens of various ores and minerals, as well as displays featuring products made from those materials. There were live demonstrations of cement mixing, brick making and pottery making, and visitors could even take a ride through a reproduction of a coal mine.

As undeniably impressive as the three buildings in this photo are, they’re only a small part of the entire event. All told, the St. Louis World’s Fair had over 1,500 buildings, 75 miles of roads and walkways, and was said to contain so many exhibits that it was impossible to even glance at them all in less than a week. To transform rough grassland and swamps into such a grand venue for the fair was a remarkable feat, and a testament not only to the skill and commitment of the 10,000 labourers who actually built it, but also to the very same spirit of human innovation, energy and industriousness that the exhibits themselves were intended to showcase.